​Kombatan is a Filipino martial arts system. The founder of the system was Ernesto Amador Presas.The style is known for its double stick techniques, but it features other stick and blade techniques, as well as empty-hand methods.
He was born in the coastal town of  Hinigaran, Negros Occidental on 1945-05-20. At age 8 he began his martial arts training under his father, Jose Presas, a well known escrima practitioner at that time.

He went on to be an athlete in his college years, participating in various sports. His training in the martial arts is eclectic, having studied judo, jujutsu, karate, and various forms of Filipino and Japanese weaponry. He was Lakan Sampu (10th Dan) in arnis and Mano Mano (hand-to-hand combat) and Lakan Walo (8th Dan) in Philippine Weaponry.
Remy Presas recognized that the classical arts of their country were losing their appeal and therefore slowly dying. He modernized the native arts into an effective fighting system that would be appealing to martial arts students living in modern Filipino society and called it Modern Arnis.
Ernesto succeeded in what most only dream of. He developed two martial art styles and made them internationally known and praised. Kombatan, based on armed skills, and Modern Mano Mano, based on unarmed skills, are the products of Grandmaster Presas’ work and will live in the history and future of martial arts. He was awarded the Grandmaster´s Award –trophy, which is awarded only to the great internationally known people in martial arts circles. 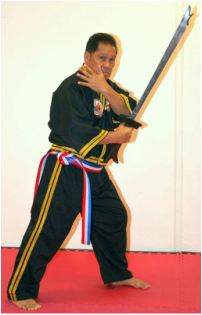 In 1975 he founded the International Philippine Martial Arts Federation (IPMAF) and began to spread the Filipino art to the outside world. In time his Arnis Presas Style and techniques became widely accepted and adopted by countries in Europe, the United States, Canada, Mexico, Australia, New Zealand, South Africa, Saudi Arabia and Puerto Rico. He has also published numerous books and videos and has been featured on the cover of Inside Kung Fu magazine with the title "Ernesto Presas: The Father of Mano-Mano" (which art he created).
Ernesto Presas traveled the world teaching seminars to spread his art. Many visited the Philippines to take lessons from him in Manila. 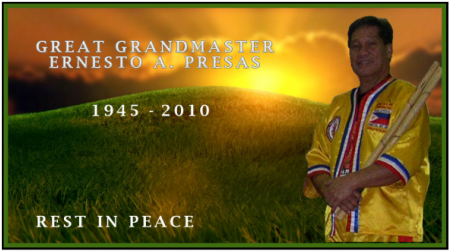 ​Sad news reached the World of martial Arts in November 2010. Great Grandmaster had passed away after fighting against illness.
​
He was a humane person and kind to people. The greatest honor for a martial arts master is that masters from other arts want to learn from you. Grandmaster Presas was known for this and he was highly respected in all martial arts styles. We all, especially Kombatan and Modern Mano Mano teachers and students, will miss the great Grandmaster. Thank you for all the inspiration, teachings and kindness you have given us.

Let us cherish the memory of the great Master by continuing the work he has begun and by developing our knowledge in his styles to a higher degree. The legend will live through us all now and forever.  Rest in peace, we all miss you.
GGM ERNESTO PRESAS GALLERY