MEMORIES WITH GGM ERNESTO A. PRESAS

MEMORIES WITH GGM ERNESTO A. PRESAS 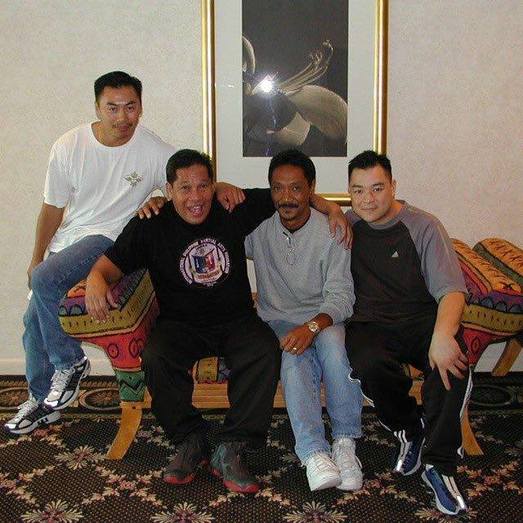 ​My memories with my friend and mentor.
late Great Grandmaster Ernesto Amador Presas.

I have been studying With GGM since 1994. I would like to
tell a story about GGM. For decades GGM wanted me to go
to his camp in the Phillippines. All this time I was taking
private lessons for several years. He finally told me if I don't
go to the camp he wouldn't give me the final 15% of his
system. So I always wanted to go so now I had to. I wanted
the other 15 %. I had to go. There were personal FMA issues
I needed his help with anyway so I went.. People don't realize
how intimate and close we were.

To make the long story short. When I got to the camp, that
night when everybody there was receiving awards .I was in
the camp bar with GM Lito Concepcion. He wasn't GM yet.
To my surprise Master Joseph tells me that GGM Ernesto
wanted me to come to the award ceremony. I ask why?. He
wants you now. So slightly intoxicated. I went. GGM Ernesto
suprised me. in front of everyone there he promoted me to
9th Dan Black belt In Kombatan. That was one of the
greatest moments of my life. What a great honor. That was
in 2007. This is just one story. I have many great times and
experience and stories with the late GGM Ernesto A. Presas.
Thank you for all that you have given me.
Much love your Friend and student. Till we meet again     - GM Robert Castro ​
when he was visiting the US east coast. When the seminar host introduced me to GM Ernesto, he was elated. He hadn't talked to his brothers in years.  But thanks to the conversation I had with Remy, he made the phone call to make sure that
Ernesto was all right. Ernesto referred to me as a brother for all that I'd done and from that moment on we got along famously.

It was GM Ernesto who was most instrumental in my first trip to the Philippines in 2007.  He told me to “get to Manila” and he would take care of everything else for me.  And he was a man of his word.  I arrived in Manila and he met me at my hotel, arranged round trip transportation to the family beach in Negros, took care of my meals, lodging, gave me an equipment package and even covered the training camp fee.  And if that wasn’t enough, he promoted me to ninth degree Grand Master at that camp.  And when I say these things, the first question that comes to mind is, how much did it cost me?  Like I said at the beginning of this paragraph…not a dime, because he covered all my expenses.  He said we were brothers with his words, and proved it with his actions.  He is sadly missed.

Respectfully,
Datu Hartman
At the end of this intensive seminars GGM Ernesto promoted GM Juerg Ziegler, Carlos Pulanco and Julius Melegrito to „Master Instructor“, Dayang Monika Ziegler and Guro Rami Vainionpää were promoted / tested to Lakan Dalawa. In 2000 again in Orland, USA – we had a very special breakfast meeting with GGM Ernesto where we all decided together to go ahead and start to teach Kombatan/Modern Arnis in all our Sin Moo Hapido schools in the European Sin Moo Hapkido Association as a special new System. GGM Ernesto was highly happy and agreed to support us to the fullest. Since then Kombatan / Modern Arnis has grown from strenght to strenght in Europe with the help of GGM Ernesto A. Presas and his pioneeres in Europe, GM Juerg Ziegler and GM Walter Hubmann. Many followed in Finland (Rami Vainionpää & Tomi Harell), Portugal (Rui Ramunni), Germany (GM Carolos Pulanco and GM Wolfgang Schnur) and so many more. Also in Italy with Master Randy Remolin. Now so many more keep up the flame of this great FMA Art Kombatan which was founded by our great teacher, my compadre and great friend and mentor – the late GGM Ernesto A. Presas, R.I.P. – we miss you all!
- GRAND MASTER JUERG ZIEGLER, SWITZERLAND - ​
For the next 6 months, I trained and learned from all of the instructors, helped GGM teach at The Lyceum and UST, traveled to Hinigaran for the World IPMAF Camp, and ate a lot of food! I will always be indebted to those instructors who took the time to teach me.  A lot of knowledge was passed down to me during this time and I will never forget my time with GGM, the instructors, our visits to Hinigaran, and of course, Manila.
​ - GRAND MASTER SHELLEY MILLSPAUGH, USA -
I am very sure that we are many students of GGM Presas that can tell the same story. While training in the Philippines GGM Ernesto Presas became like a father to us. I stayed at the dormitory opposite University of Santo Thomas and everyday GGM would check up on me to see if I was okay. He came regularly with a tv, some water etc. Always taking care and providing for us arnis students. In the old gym everyone was very open and interested in passing on knowledge and GGM Presas would supervise every trainingsession. When I returned to Denmark, I had a different look at Filipino Martial Arts. I knew that I was on the right track. And when GGM Ernesto Presas came to Denmark in 1988, I was once again surprised. He took us all by surprise by teaching and showing us new and advanced techniques and methods that we had never seen before. In 1991 I became the Chairman of the Danish Arnis Federation and had the opportunity to invite GGM Ernesto Presas back to Denmark. I have been back to the Philippines to train with GGM Presas and everytime he and his family opened their house and I always felt welcome. Thank you GGM Presas and Presas Family for always being open and willing to share your great knowledge of Kombatan Arnis and guide me on my way.
​ - GRAND MASTER TOBY HARTELIUS, DENMARK-